skip to main | skip to sidebar

This is one of the coolest packs I have ever seen - Finlay a pack that will actually last out in the field.

The lower compartment is intended for an emergency shelter tarp, it opens quickly with a quick release velcro flap. The compartment detaches from the pack and can be worn independently as a waist pack.

Constructed from 18 ounce canvas and reinforced with thick leather and copper rivets, this pack was made virtually indestructable.
Posted by Jonathan Thralow at 9:57 AM No comments: 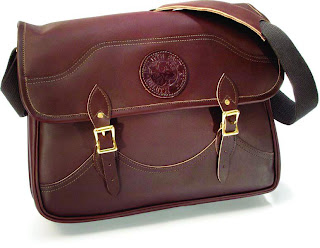 Some adventurers pack up their gear in duffels or rucksacks and then set off exploring trails to the high pass or navigating a wild river to the sea. I like my adventures too, but most of them have their point of origin in the stacks of my local library and end at the return desk. I am by nature a bookworm.

I am just as passionate about my book bag as the most ardent hiker is about his backpack. I like leather. It is no coincidence that the highest quality books are bound in leather. It is both beautiful and rugged, and it simply exudes an air of distinction. Nothing protects like real leather.

My leather book bag has given me years of service. I anticipate it will give me many more. I used to have to replace my vinyl bags every year or two, but this one keeps on functioning as strong as ever. It has a padded shoulder strap, which is important since the bag is used for more than just books. The interior pocket is very practical because it keeps my small necessities handy so that I do not waste time fishing for my keys or a pen.

I don't know where my next literary adventure will take me, but I know what I'll be taking with me—my leather book bag.
Posted by Jonathan Thralow at 10:20 PM No comments:

Multi-tool knives have been used for hundreds of years, at least since the first century in Rome. However, the true multi-tool knife didn't come into its own until the 18th and 19th centuries, when a folding knife was fitted with a marlin spike for sailors or hoof pick for cavalry troopers.

The most commonly known multi-tools are the two brands of Swiss Army Knife. Victorinox and Wenger. Both in existence over 100 years, they are equal in quality and most have equivalent functions and wide selection of various models tailored to the specific anticipated environment.

Multi-function knives are designed to provide a light-weight field expedient as an alternative to having the actual tool available. While some are designed for everyday hard use (for example, the green handled Mauser by Victorinox), the vast majority are for occasional contingency or emergency use only.

A more practical multi-function knife is the Leatherman, Gerber – or similar – folding tool kit. They are generally more robust and can withstand occasional routine use.

There are some top-of-the-line multi-tool knives, but many are no longer made because of expense. The Case combination knife with a hatchet and skinning blade is an example.

Another popular class of multi-tool knives are the removable blade knives and tools expressly used by fishermen. Usually kept in a roll-up case, these knives are specific to the salt- and fresh-water sailors and fishermen.

A multi-tool knife is an essential part of any emergency kit or backpack. The key feature to look for is quality. A knife prone to failure is next to useless. Ideally, a multi-function knife should be passed on to to the next generation in the same condition it was bought.
Posted by Jonathan Thralow at 1:01 PM 1 comment: 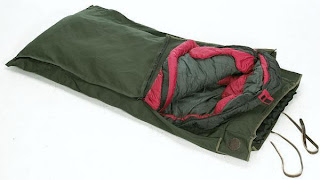 A bedroll is traditionally used by cowboys, hikers and trailblazers as an easy way to take a comfortable bed around where they travel. Constructed typically of layers of blankets and/or quilts and wrapped tightly with a tarp or other weather proof material, they are generally carried about the back usually tied into a pack of other necessary camping supplies.

Canvas bedrolls are much easier to roll, carry and maintain. Many of today's imported bedrolls have become thin and do not hold up to the traditional canvas campers roll.

Canvas outer shells provide protection from damp, wet conditions while allowing heat and moisture from your body to escape the pack, keeping you comfortable and dry regardless of the weather. Thin insulation materials allow the pack to remain flexible and easy to move while still being comfortable. You can purchase a bedroll in a variety of sizes and weights, made from a variety of materials from natural and organic to manufactured. There is a bedroll style and type to please almost any outdoor enthusiast.

The quality of your pack will undoubtedly affect the reliability and durability, so be sure to look for materials and craftsmanship that will guarantee you years of trouble free use.
Posted by Jonathan Thralow at 12:01 PM 1 comment:

Have you had a few too many daypacks & backpacks fall apart after a year or two of use? One of the most frustrating aspects of choosing camping gear is realizing that even the best gear you can buy at most big box stores will end up falling apart on you after just a little bit of hard use.

A good backpack is key to enjoying a beautiful day of hiking. When you purchase one with a lower quality, you risk ruining a perfectly good hike with a broken strap or uncomfortable fit. If you are unfortunately enough to be stuck in the middle of a long trip when your pack fails, the problems can be much more severe. Tying a strap back together to keep your pack intact long enough to return from a hiking trip can be extremely painful after the first hour or so of hiking.

The rugged leather and canvas backpacks located with 127 years of experience creating high quality camping packs. They may cost a bit more in the short term, but by purchasing a well made backpack you can save money in the long run. These daypacks and backpacks from Minnesota are guaranteed for life, making them a much smarter investment than a succession of cheaper bags spread out over several years.
Posted by Jonathan Thralow at 8:11 PM 1 comment: